I'm giggling because I just told Steve that I'll give this a go, but in the end 'I may delete it'.

I started our family blog back in June 2008. You know, to let family and friends in on what we were planning to do this time out of the States. Little did I imagine where we'd be, mostly because we're now a family of 4! (sorry Libby - 5)

~Side note: I can't believe Steve just interrupted my writing to show me something. He gets so annoyed if anyone speaks to him whilst he's typing. Humph! 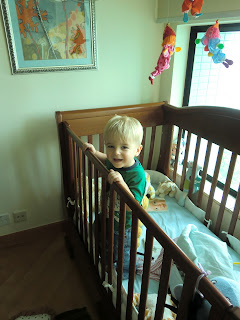 Steve had always been an early riser, but Ethan George has him beat lately. Let's say around 5:30  he'll wake and maybe cry a bit and then start playing around in his bed. He has a musical bear that  he'll turn on and then sit and look at a few books I leave in the corner of his crib. There's an alligator xylophone that sits on the window sill in reach - maybe he'll pound out a few notes. Or there's always some sort of activity out of the window (he's 21 floors up overlooking a beach and waterway that has small fishing boats all the way up to huge cargo ships going by). Eventually we'll hear his nook hit the floor, that is his signal that he's had enough 'alone' time and it's time to come and get him. This act has just recently been followed by 'uh-ohhhh' - which makes us smile and jump up to go to his rescue. 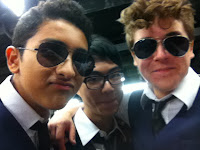 Gabriel, who is now 14 1/2 and taller than Steve, is not such an early riser. He gets up and dresses and heads out the door with a breakfast smoothie by about 7 am.  He's got a lot on his mind right now. Some of his close friends have announced they'll be moving or changing schools. Then there's his music. His tastes range from the oldies to, well, a range that astounds me. Beatles, The Ramones, and Queen all the way to Green Day.  He requested an electric guitar for his birthday last Jan and has been playing faithfully on his own since then. He has one of Steve's coworkers helping him along and endless Youtube vids to learn whatever. He's with his 2nd band that play together after school. We're amazed at his ability, and how much he can do in such a short time. -I've noticed his sketching has taken a back seat, for now. He does, however, plan to study art in the future, so I'm sure he'll get back to it.

Then Ethan George and I are on our own. We take Libby out for a walk, stop by the playground and fit in a quick swim when we can. Then there's morning nap around 9am til 11am.

Naptime... here's where I get a few things done around the house, maybe read and journal, catch up on email/FB, throw something together for lunch, iron, and sometimes sleep. 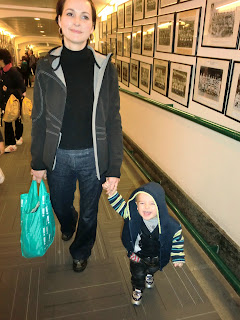 There's an afternoon nap too. That's for preparing dinner if we're home. But we go out too. Always something going on. And I love going out a couple times a week. Maybe take the ferry into Central, HK Island and run errands or there's plant street in Prince Edward (a few blocks of plant and flower shops), check in on the boys out at the school (50 min from door to door by shuttle bus to the train station, ride 3 trains, and a short walk from the station to the campus) or just stay here and wander around our island visiting with friends.

Oh my, it's getting late and I must get some sleep. Gabriel and I just caught up a little on Once Upon A Time. We're still midway in season 1. What a creative expression of the classics! Fun.

Thanks so much, Andy! I was surprised with how happy it made me feel to do a post. Now, Steve says I have to keep the entries coming, with a goal of 1/wk...